Recent years have seen an increasing of requirement in the automotive and industrial fields for lower power consumption in higher power applications. This in turn requires shunt resistors that support high power and high accuracy current detection to achieve high efficiency operation in a variety of applications. ROHM’s GMR and PSR series shunt resistors provide highly accurate current detection even at high power, making them ideal for high power applications in the automotive, industrial and consumer sectors.

The newly developed GMR320 series is offered in a resistance value range from 5mΩ to 100mΩ and a rated power of 10W, making them ideal for automotive engine ECUs and headlamps as well as motors and power supplies for industrial equipment and home appliances. Unique structure and optimized materials allow the GMR320 series to reduce surface temperature rise by 23% over standard products, ensuring high ruggedness against overcurrent loads even though it has the smallest size among 10W class resistors in the market . In addition, a high performance metal alloy for the resistive material provides low Temperature Coefficient of Resistance (TCR), that makes it reliable and highly accurate current detection possible even in the low resistance values.

On the other hand, for the PSR series, which is widely used as high-power shunt resistors, the maximum rated power has been increased by up to 15W and the standard TCR value has been also improved by applying the terminal temperature derating method. Ultra-low resistances value from 0.1mΩ to 3.0mΩ can be offered, and higher rated power and high accuracy of current detection is provided in a compact package, contributing to greater miniaturization in automotive and industrial applications same as GMR series.

Furthermore, from October 2021, thermal simulation models for shunt resistors will be available on ROHM’s website. This will make it possible to perform simulations before designing the actual products, even in high power applications where thermal design is particularly difficult, reducing design man-hours considerably.

ROHM is committed to continuing to expand its resistor lineup (a founding product) from low to high power and provide various tools and other technical support to contribute to the evolution of vehicles and industrial equipment by great energy savings and miniaturization. 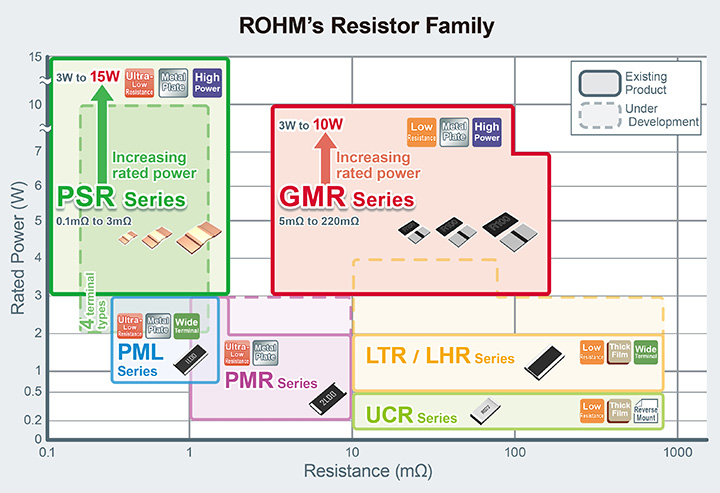 ROHM newly developed the GMR320 series of high-power low-ohmic shunt resistors while extending the rated power of the high power ultra-low-ohmic PSR series to cover the high-power range up to 15W. Furthermore, both series are qualified under the AEC-Q200 automotive reliability standard for passive components, ensuring a maximum operating temperature of 170°C that provides high reliability even in vehicle environments where temperatures can be particularly severe, such as in the engine compartment. 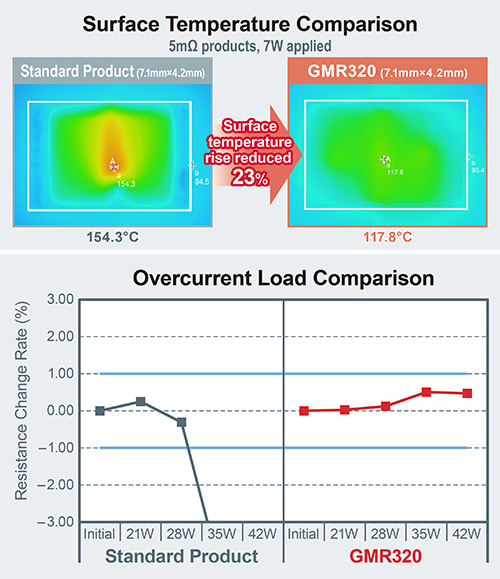 One issue when using shunt resistors at high power is suppressing the rise in surface temperature of product. GMR320 series improves heat dissipation by conducting a thorough review of materials and adopting a proprietary structure that significantly suppresses surface temperature rise. For example, when a 5mΩ product is used at 7W, the surface temperature of standard products can reach as high as 154.3°C, while ROHM’s new products suppress temperature rise to just 117.8°C, a difference of 23%. Moreover, superior heat dissipation makes it possible to achieve the smallest size (7.1mmx4.2mm) in the 10W class while ensuring stable performance without a change in resistance value even at overcurrent loads.

2. Excellent temperature coefficient of resistance – even in the low resistance region 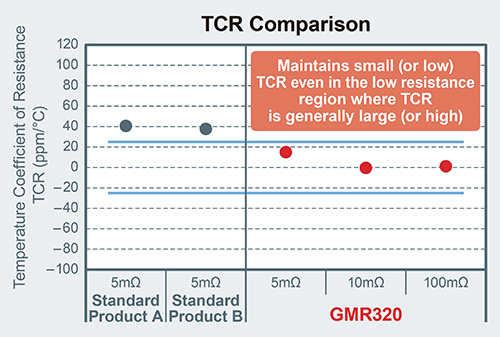 ● PSR Series Advantages ROHM’s PSR series of shunt resistors which feature excellent TCR even in the ultra-low-ohmic range has been well-received in the automotive and industrial equipment markets exposed to harsh temperature environments. Until now ROHM utilized ambient temperature derating for its shunt resistors, but this time terminal temperature derating has been applied, making it possible to drastically improve the rated power. For example, for the PSR500 series, the rated power has been increased from the conventional 5W to 15W, enabling support for a wider range of applications. 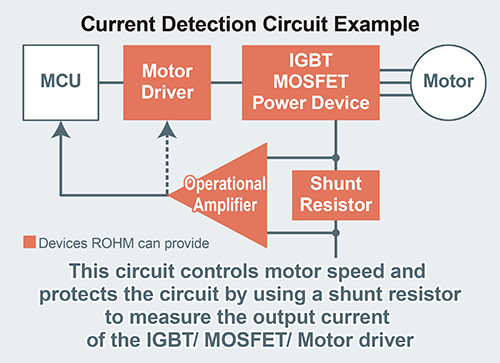 From October 2021, thermal simulation models for shunt resistors will be available on ROHM’s website. These models allow thermal design (which is a major issue during application design) to be simulated in advance, reducing design man-hours. 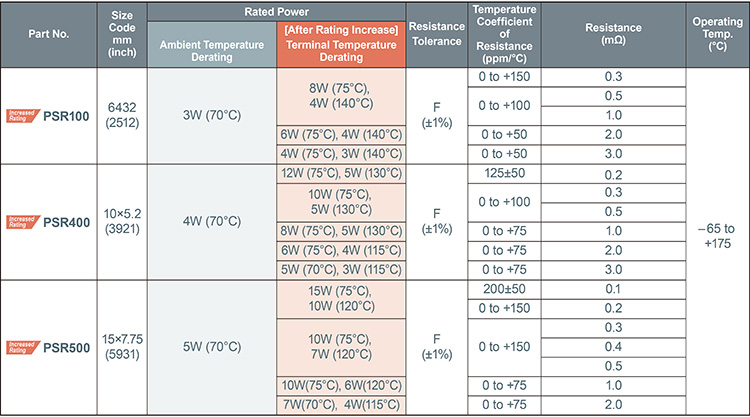